If you often travel abroad must know that in addition to carrying a passport and credit card in the luggage, there is one more thing that is necessary, which is the power socket adapter suitable for the destination country. If you do not consider this issue before you travel, you will find that there is no suitable charger when you arrive at your destination, and the phone happens to have insufficient power, which will make people lose their sense of security.

The issue of power plug standards starts from the end of the 19th century and the beginning of the 20th century. At that time, the "genius inventor" Tesla invented a three-phase 240V AC with less long-distance transmission loss, defeating Edison's 110V DC in one fell swoop, but for safety reasons, the voltage was reduced to 110V, which eventually became the power supply standard in the United States. The power supply first spread from the United States to Europe, and with the invasion and colonization to the whole world. Later, due to the lower 110V voltage and greater power grid transmission loss, some countries doubled the voltage specification to 220V, while some countries insist on using 110V voltage, and some countries use 120V, 130V, and 240V voltage. The size of the voltage used in each country is different, so the standards for plugs and sockets are also different in each country.

How many volts are used in different countries?

Voltage overview around the world:

In countries or regions that use voltages of 220-230V, voltages of 110-130V are also useful, such as Sweden and Russia. However, most countries use 220-230V for indoor electricity.

In most cases, the conversion plug can handle voltages between 100V-240V.

Most countries/regions have clearly defined plug and voltage standards. However, plugs used in many countries in Latin America, Africa, and Asia are messy (usually incompatible), and sometimes the voltage varies from region to region. Obviously, this makes it difficult for travelers to evaluate the plug adapters or transformers needed for travel. Therefore, before traveling abroad, you need to find the rated voltage and voltage of the plug and socket of the corresponding country and region on the Internet in advance, and prepare the plug adapter you need in advance to avoid the mismatch of the plug and the socket. Dangerous" situation.

The birth process of the plug:

The plug was born in a world that has not yet globalized, which is the main reason for the inconsistent plug models around the world. The original concept of the plug was proposed by the American inventor Harvey Hubbell, who invented the detachable connection plug and applied for a patent in 1904. The International Electronic technical Commission, established in 1906, is the world's earliest international electronic technical standardization organization, responsible for international standardization in the fields of electrical engineering and electronic engineering. In the early days, the agency focused on the standardization of electrical equipment, rather than the standardization of plugs and sockets. Waiting for engineers to focus on the standardization of plugs and sockets is already after World War II. Before the Second World War, the infrastructure of various industrial powers was basically complete. From the early 20th century to 1947, the development of plugs and sockets has not been controlled by any standardization. Different standard voltages and plugs have been widely used. The cost of forcibly promoting a certain type of plug is already high, and out of commercial interests, most companies focus on the domestic market, which has led to the appearance of so many types of plugs all over the world.

In 1986, the International Electronic technical Commission tried to develop universal power plugs and sockets, but after several years of demonstrations, they could not help. If you want to unify the global power plugs, you must not only replace the production equipment of all factories, but also re-install the sockets in each building, which will affect your whole body. The high cost and feasibility will block the standardization of plugs and sockets. outer. It is impossible to unify the basic standards of voltage and plug, as Pablo Mayor de Bercia, spokesperson of the Spanish Standardization Association said, "Who can persuade a country to change the national infrastructure?". Since the global unified plug standard cannot be realized in a short time, it is not without a solution. A small transformer can solve the problem. When you travel next time, remember to find out the country's voltage and current standards and use the corresponding adapters and transformers.

Types of plugs and power sockets used in various countries in the world: 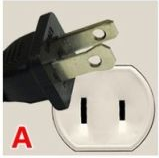 The two parallel pins or parallel blades of the A-type plug are flat, and the two small holes at the end of the plug are to prevent the plug from slipping out of the socket.

The rated current of the plug is 15A. This type of socket can hardly be found in new buildings in the United States and Canada. But it can already be found in old buildings. Type A plugs and sockets are mostly used in North and Central America. 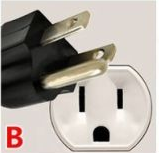 Type B plugs and power sockets:

Type B plugs are similar to Type A plugs. In addition to the same two flat parallel blades, there is also a round earth pin. The rated current of the plug is 15A. The plug socket is used in Central America, North America and Japan.

Type A and Type B plugs are not insulated (the pin handles are not covered; they do not have a black covering towards the plug body like Type C, G, I, L, or N plugs), and the sockets are not recessed Wall, which means that if the plug is pulled out halfway, its pins will still be connected to the socket. As we all know, Type A and Type B sockets are dangerous because the distance between the socket and the partially pulled out plug is large enough to touch the pulled out plug with your fingers or other non-insulating objects, which is prone to electric shock. 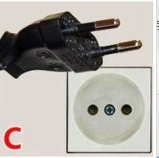 Type C plug has two round pins, the plug is not grounded and has no polarity. The rated current of the plug is 2.5A. The C-type plug is the most widely used plug in the world and can be used in all European countries (except for the United Kingdom, Ireland, Cyprus and Malta) 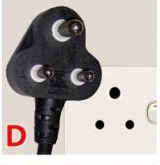 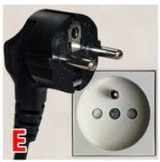 Type E plugs are similar to Type C plugs, but Type E plugs have a female contact to accommodate the ground pin of the socket. The E-type plug has a rated current of 16A and is mainly used in France, Belgium, Poland, Slovakia, Czech Republic, Tunisia and Morocco Type F plugs have 2 round, parallel pins, 2 openings at the top and bottom, and are designed to be grounded to F-type power sockets. The rated current of the plug is 16A, and the working voltage is between 220V-240V. Type F is used for example in Germany, Austria, Netherlands, Sweden, Finland, Norway, Portugal, Spain and Eastern Europe. 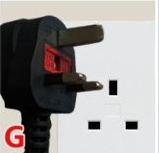 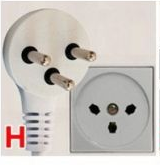 H-type power sockets and plugs are unique to Israel. Type H can be identified by three triangular pins. Since the plug of the H-type plug is not protected by an insulating layer, it is necessary to pay attention to safety during use to prevent electric shock accidents. The rated current of the H-type plug is 16A, and the plug is only used in Israel and Pakistan. Type I plugs and sockets:

Power outlet type I features 3 pins, two flat prongs and a earth pin, that form a V shape, there is also a ungrounded version of the plug, featuring only two flat V shaped prongs.

Type I plugs have a rated current of 10A and are mainly used in Australia, New Zealand, Papua New Guinea, China and Argentina. 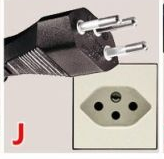 Switzerland has its own standard, which is described in SEV 1011. The plug is similar to C, except that it adds a ground pin. Type N looks a lot like Brazil's Type N standard, but it is not compatible with it because the ground pin of Type J is farther away from the center line than Type N. The J-type plug has a rated current of 10A and is almost exclusively used in Switzerland and Liechtenstein.

K-type plug has two round feet and a grounding foot. The rated current is 16A, and the K type is almost only used in Denmark and Greenland.

L-shaped power sockets have two different styles. There are two types of L-shaped plugs, one with a rated current of 10 amperes and the other with a rated current of 16 amperes. The 10 amp version has two circular pins with a diameter of 4 mm and a spacing of 5.5 mm, with a ground pin in the middle. The 16-amp version has two round pins 5 mm thick, 8 mm apart, and a ground pin. Type L is almost only used in Italy, Chile, Uruguay, and is also found randomly throughout North Africa. 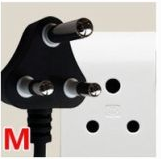 This plug is similar to the Indian D-type plug, but with larger pins. Type M is a 15 amp plug, which has three round pins forming a triangle. The M type is almost only used in South Africa, Swaziland and Lesotho.

If you want to know more about electrical knowledge, please follow us. 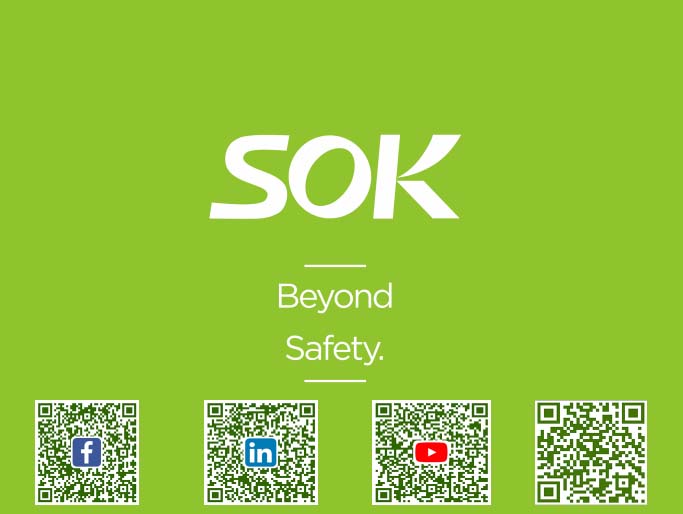